Home Government “Don’t Give Up the Ship” – City of Palm Coast Adopts “Sister... 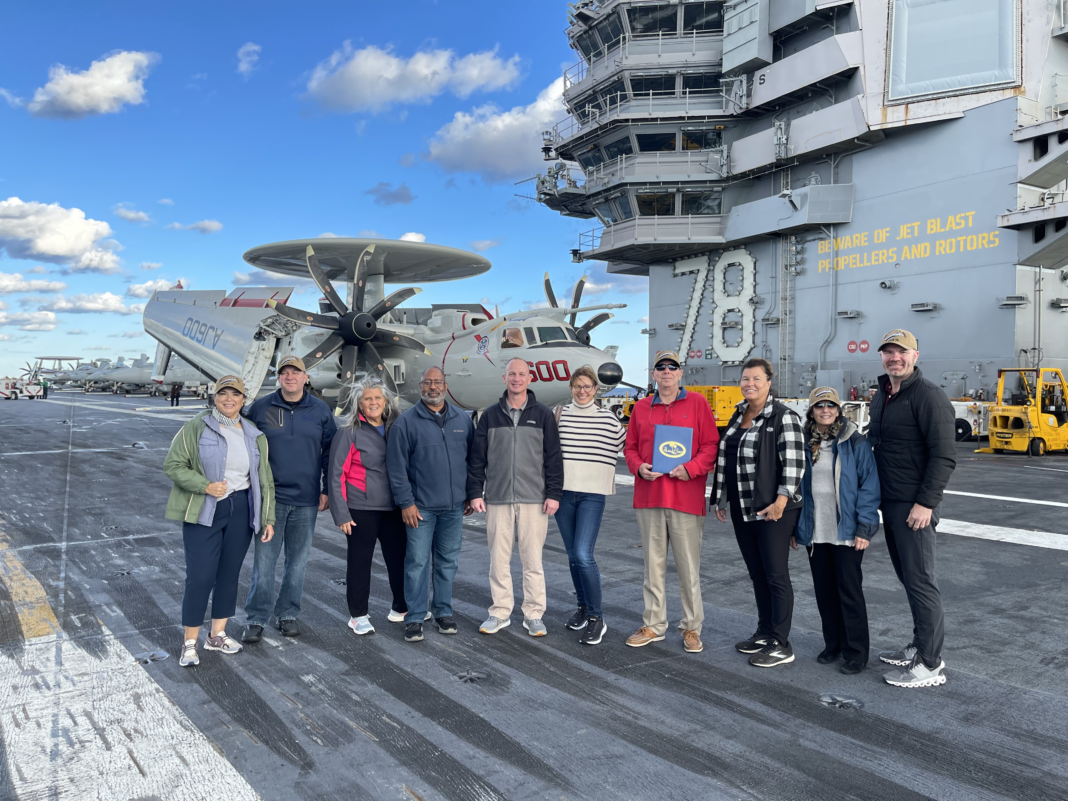 Palm Coast – I am standing on the flight deck of our newest United States Navy aircraft carrier, the Gerald R. Ford CVN 78, largest warship in the world. The soles of my feet are sore from climbing up and down steel ladder stairs for several days.  My clothes smell a bit like JP-5 military jet fuel.  My ears are overwhelmed by the sound of planes taking off and landing causing my body to vibrate at its core from such thunderous forces.  I see a panoramic view of allied NATO ships practicing naval maneuvers.  And I feel the breezes beckoning from the sea carrying my mind out to the middle of the Atlantic Ocean.

I’ve never felt prouder to be an American or sensed more optimism for my country than at this moment.  And I’ve never been more certain that I must share, no I have an obligation to share, this passion with my fellow citizens in Palm Coast.

I’ve spent my entire lifetime interacting with creative and well-educated professionals, government, and industry leaders, both from here and abroad. My political career is sometimes speckled with pessimism. But my Gerald R. Ford Aircraft Carrier EMBARK excursion was my own ‘One Moment in Time.’ It reminded me exactly why ‘we must never give up the ship.’

First – just a little background.  I was invited to embark on this special voyage by our own Randy Stapleford, Captain USN (Ret), Military and Veteran Affairs liaison for the Office of Congressman Michael Waltz with support from the Florida Inland Navigation District.  Seeing as Palm Coast and Flagler County are home to more veterans per capita than most other areas in Florida, it was my honor and duty to better understand a true military experience.  I believed it would help me create a more durable connection in Palm Coast between our past, current, and future veterans. The military is a pillar of our community, and nothing can be more important than for us to respect, cherish and value those who serve and put their lives on the line for us.

Back to my experiences on the trip:  I was honored to be one of the last civilians to land by tailhook and depart by catapult launch on an aircraft carrier via a C-2 Greyhound COD (they are now being retired). There’s simply no way to describe what it feels like to decelerate from 105 to 0 miles per hour in just seconds and depart by catapult launch while pinned to my seat with incredible force. It puts any dynamic Disney ride to shame.

For those of you unfamiliar with aircraft carriers, they are gargantuan warships designed to deploy and recover aircraft.  They’re actually floating cities at sea.  The Gerald R. Ford is the first in our newest class of nuclear-powered carriers.  It houses more than 5,200 sailors and officers on nineteen floors of decks, hangars, bunkrooms, mess halls, dining rooms, a fully equipped library, a shop, a post office, and several gyms.  Military technologies are state-of-the-art.  Engineering is of the highest development.  The Gerald R. Ford Museum is also onboard, exhibiting many of our 38th President’s historic artifacts and memorabilia. I watched our sailors perform and practice with professional precision and enthusiasm, operating always in harm’s way. I attended a ceremony to pin new Chiefs who serve as the very engine of our Navy.  I listened, observed, and participated in several operations and exercises.

Following this experience, here’s what I want to express most to my fellow Palm Coast and Flagler citizens:  After witnessing the dedication and fervor of our military, all of us need to feel an incredible sense of optimism for the future of our country.  Our democratic American way of life has faltered a bit and we’ve been torn into factions.  However, the men and women of our military are simply the most outstanding the United States has to offer, pulling us together for our common good.  We must always stand proud of our Armed Forces.  And, as so many veterans have found their way to live in Palm Coast, we must continue to salute their service and encourage our youth to consider the military as a career.

I delivered a proclamation and a ‘Key’ to our Palm Coast City when I boarded the aircraft carrier.  It represented the everlasting sentiments of our proud citizenry.  It proclaimed the City of Palm Coast and the Gerald R. Ford Aircraft Carrier as Sister Cities, two vast communities that will continue to grow to share educational opportunities, common resources, and a connection to value, integrity, and accountability in actions and decision-making.  I encourage other Florida cities to do the same.

So that’s my story. My journey on the Gerald R. Ford gave me an enormously optimistic and patriotic perspective on life in Palm Coast.  It encouraged me to communicate with all of you on how to live a fuller existence by navigating and appreciating all sorts of different elements in our days in this life.  And to never give up the ship!

Stronger Together: Flagler Women Get Boost with “A Salute To Women” Show