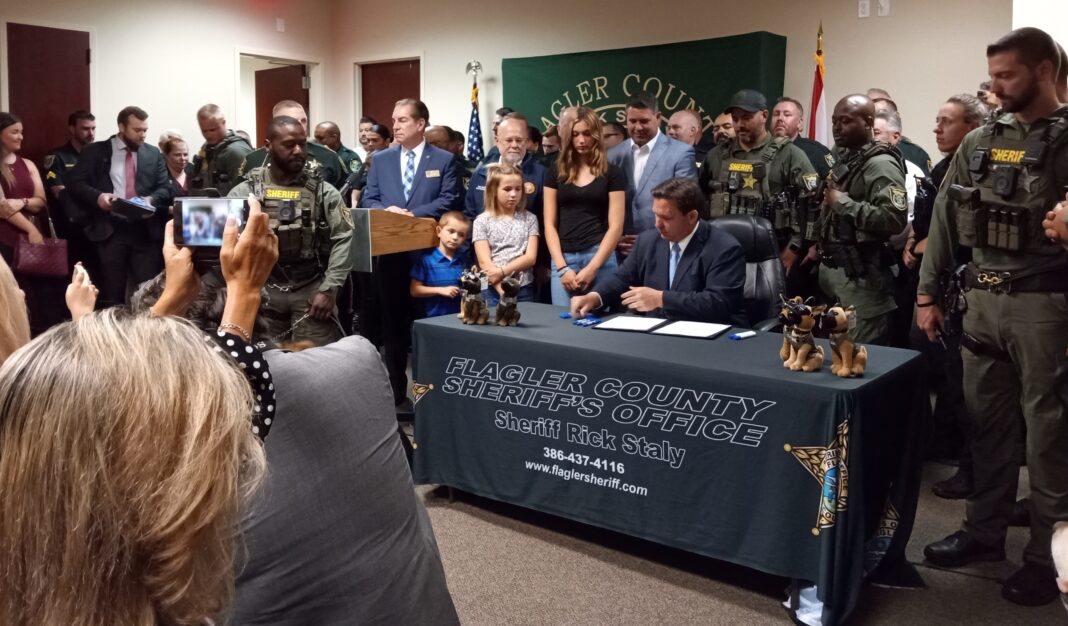 Bunnell, Fla. (June 10, 2022) Making an early stop in Bunnell to sign Senate Bill 226, Florida Governor Ron DeSantis was surrounded by members of law enforcement as well as staunch supporters of the canine community at the Kim C. Hammond Justice Center as he put pen to paper, making the ‘Care for Retired Police Dogs’ official.

With a $300,000 recurring appropriation for the Florida Department of Law Enforcement program which will be administered by a non-profit organization, handlers of K-9s who have served five years as a member of law enforcement or three with an on duty injury are eligible for up to $1,500 of veterinary or annual wellness support.

Among those present for the bill signing was Flagler County’s own advocate for the local K-9 unit, Emma Stanford, founder of Emma Loves K9s.

Since creating her non-profit organization several years ago, she has become synonymous with the Flagler County Sheriff’s Office K-9 Unit. Fundraising to help support their needs, her own journey with the K-9 unit began when her family started their search for a therapeutic canine and reached out to the sheriff’s office for advice.

Since then, Emma, the K-9 Unit and Flagler County Sheriff Rick Staly have become close, so much so, that during the bill signing ceremony, Staly remarked on the mutual admiration.

“In our community, I couldn’t ask for a better community to serve. They really support law enforcement,” he said.

“To have Emma live in our community, I’m not sure who adopted who, either Emma adopted us or we adopted Emma, but it’s a great friendship and partnership. It proves that you can have a vision, in this case at 11-years old, and take it to fruition, and keep building on it, which is what she is doing,” said Staly.

Expressing appreciation for the overall support Governor DeSantis and the Legislature have shown for law enforcement, Staly and St. Johns County Sheriff Rob Hardwick applauded the governor during their remarks.

“It’s extremely exciting to host the governor in Flagler County as he signs a pro-law enforcement bill, in this case, for our 4-legged partners,” said Staly. “It’s great to be in law enforcement in Florida.”

“I started the bill but Emma is the one behind it,” said Rep. Killebrew modestly, known for his soft spot for animals.

“I used to rescue dogs with a group, out of puppy mills and I’ve just always been a dog i.e. animal person. Anytime a bill comes up about animals, they usually come to me in the House,” he shared.

“Last year I got the one about the EMT’s to be able to transport them, that was my bill last year, and then I got this one, this year, and that’s how I met Emma. I tell you, she is a sweet little girl and you don’t see many kids like that.”

DeSantis’ longstanding support for canine causes dates back to his time as a U.S. Congressman, and in 2015 he partnered with K9s for Warriors’ CEO Rory Diamond to sponsor the PAWS Act, legislation providing qualifying veterans with service animals as part of their therapeutic recovery.

Diamond was on hand to see the bill, set to take effect July 1, signed into law.

“This is incredible for all the working dogs across the state who are protecting people. They get beat up for six, seven years of service and we need to take care of them,” said Diamond.

“Dogs are making the world better everywhere and the more we can do that, the better.”

An engraved memorial stood in front of the courthouse for all entering to see the names of K-9s who had served, retired and passed away.

“They were not killed in the line of duty, but this is an example, all these handlers had to take care, when they retired with the handler, they absorbed all the costs until these dogs passed. That’s what I corrected internally last year, that’s what this bill does,” explained Sheriff Staly.

The support of Governor DeSantis and the Florida Legislature has inspired the Stanford family. Emma’s parents, Tim and Carmen watched with pride as their daughter helped make history.

“Today is just incredible. That’s the only way to describe it, unbelievable. I think recognizing what kids do outside of school, for Emma specifically, it’s not just the recognition that it’s not just an incentive to continue, but it’s her passion,” said Carmen Stanford. “Her passion being recognized by those who really matter to her I think it’s just going to push her into bigger and better things.”

As for Emma, the day was another milestone in her efforts to continue helping others.

“I’m extremely excited that I got invited by the governor and Sam Killebrew to come here because it means a lot to me for helping the retired dogs,” said Emma humbly. “With more people knowing about this, hopefully we can reach out to more K-9 Units and help more K-9s across America or even out of America,” she said.

The Principle Of It: Women’s March for Abortion About Bigger Issues