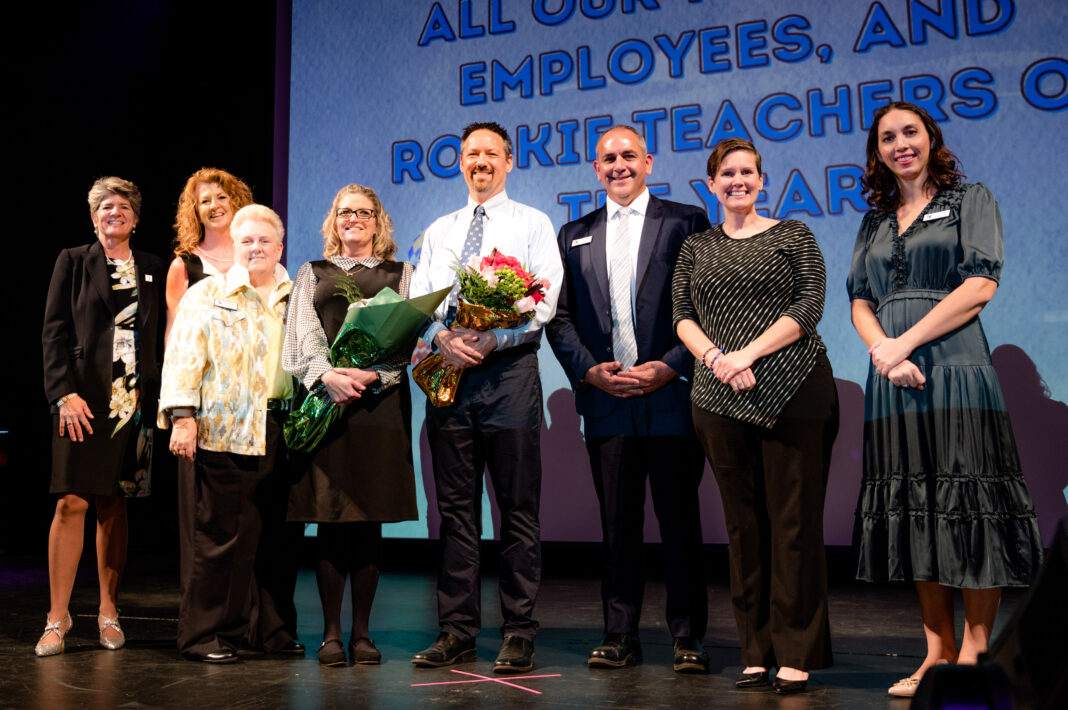 It was a packed evening, with a parade of finalists. The district took time to honor Donelle Evensen, our Assistant Principal of the Year, and Marcus Sanfilippo, our Principal of the Year (both are at Bunnell Elementary School). The hundreds of people in attendance then watched highlight videos of all our Employee and Teacher of the Year finalists before Superintendent Cathy Mittelstadt was given the envelopes containing the names of our District Employee and Teacher of the Year.

Renee Berry, Custodial Services department secretary, was named District Employee of the Year. Originally from Texas, Berry moved to Flagler County in 2009 to be closer to family. A year later, she began working for Flagler Schools as a testing coordinator with Flagler Technical College. In 2015, Berry transferred to Custodial Services as their department secretary. When she heard her name called, she said it was “thrilling…but very humbling. I’m used to being behind the scenes, making sure everything is just right.” She went on to say, “To me, it means it’s not unnoticed. No matter how much you may think you’re not appreciated or how much you work and you think they didn’t see it…they do. They do notice you.”

Lee Winfree, a math teacher at Matanzas High School, was named the District Teacher of the Year. Winfree has been teaching for 22 years, with half of that time spent in Flagler County. He’s taught AP Calculus, AP Statistics, and Probability and Statistics. He has also taught a pair of dual enrollment classes through Daytona State College. Winfree is a graduate of the University of Maine and has a Master of Science in Education from Walden University and a Master of Science in Mathematical Science from the University of West Florida. His reaction to being named the top educator in Flagler County? “Gratitude. Appreciation. Surprised. I think all of us want to win it. We don’t expect to win it because we know how amazing all the teachers here are in Flagler County.”

Flagler Schools strives to be the nation’s premier learning organization. Our mission is to ensure educational success through high expectations and innovative thinking in a safe learning environment to empower students to reach their full potential as responsible, ethical, and productive citizens in a diverse and changing world. We can be reached online at http://flaglerschools.com or https://www.facebook.com/FlaglerSchools and via telephone at 386-437-7526.