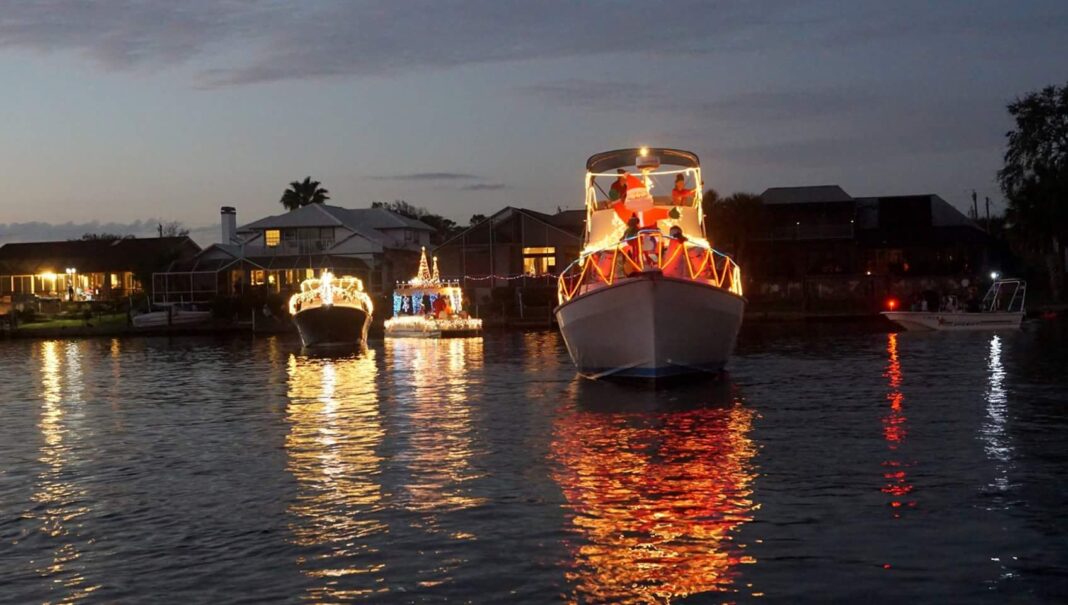 At about five o’clock, it begins: a sedate drift of boats scattering lights across the water in Palm Coast’s Cimarron Basin. It is the beginning of the Palm Coast Boat Parade, this year on December 3.  As twilight deepens the sky, more boats begin to draw into the gathering area, captains and crews exchanging hearty greetings as they glide past one another in polite aquatic do-si-dos.  Along the Intracoastal Waterway even more boats have assembled.  This year more than 65 boats are expected, still holding the record for the largest community lighted boat parade in Florida.

At six o’clock, lights flashing, the sheriff’s boat sets forth and guides the Parade and the appointed lead boat out onto the Intracoastal Waterway.

A majestic line of decorated boats, cruisers and sail boats interspersed with canoes and kayaks begins its serene procession down a black velvet corridor of lights.  Boat horns blast in call and response to tooting car horns and cheers from hundreds of fervent spectators lining the shore.

The Parade, one of the community’s most highly anticipated events, is now in its 39th year. Palm Coasters have enjoyed this unique annual celebration for four generations.  The parade’s success is due wholly to the enthusiastic participation of boaters from all over Palm Coast and neighboring communities, the numbers growing year after year.

It all began in 1984 with a group of boaters who would soon form the Palm Coast Yacht Club.  The second year ITT, the founders of Palm Coast, made it a contest with a grand prize a trip to Italy.  But the Club soon eschewed that format and offered it as an event purely in the spirit of a happily non-competitive sharing of community holiday spirit.

The official parade has continued without interruption ever since, with the exception of 2013 when the parade was called “because of tornado” and held the following evening, and again during the 2020 pandemic when an informal group of boaters formed a small but enthusiastic ad-hoc parade for the benefit of on-lookers.  Last year, as the world came back together, the official Parade was back in full force with 74 officially registered boats and many others.

Once again, Flagler Broadcasting is providing making live, on-site  coverage of the event, offering holiday music with vivid color commentary and descriptions of the boats accompanied by call-outs and live interviews with participants on the water and the shore.  “The Queen of Jazz,” Linda Cole, will be on the air along with Flagler Broadcasting’s David Ayers and the eminent Priscilla Netts of Palm Coast.  Grand Marshalls on the lead boad are David Alfin, Mayor of Palm Coast, Flagler County Sheriff Rick Staly, and Palm Coast Yacht Club Commodore Daniella Crawford.  This year the Parade is dedicated to the late Joe Rizzo, long-time champion of the Flagler County School System and executive director of the Flagler Education Foundation.

Departing from the Cimmaron Basin, the Parade will pass the Tidelands, Marina Cove, the Hammock, Yacht Harbor Village, and the Palm Coast Legacy Vacation Resort.  It will then proceed under the Hammock Dunes Bridge along St. Joe’s Walkway and Canopy Walk, pass by Island Estates, Waterfront Park, and Grand Haven before dispersing at the Clubhouse Waterway.  The Parade will be escorted by boats from the Flagler County Sheriff’s Office, TowBoatUS, and the Florida Fish and Wildlife Conservation Commission. The Parade is supported in part by the Florida Inland Navigation District.

Parking continues to be available near European Village for viewing along St. Joe’s Walkway, Canopy Walk, and at Waterfront Park.

As always, participation in the parade is free, but registration is required, as well as attendance at a captains’ safety meeting at the Community Center the morning of the Parade.  To register your boat and for up-to-date details visit the Palm Coast Yacht Club website at www.palmcoastyachtclub.com and on Facebook.  Rain Date is December 4 and will be announced on the website by 4 p.m. on the December 3.

The lights will be lit, the picnics and parties will be planned, and the stars shall shine down.  What a fine night it will be.

The Show Must Go On: 17th Annual Creekside Festival